Mike McKay was part of one of Australia’s most marketable sports teams – the Oarsome Foursome. The crew won gold at the 1992 and 1996 Olympic Games in the coxless four;  world championship gold in the same boat in 1990 and 1991, and  another world championships the coxed four in 1998. Mike also raced in the 2000 Olympic Games silver medal winning eight and 2004 Olympic bronze medal winning eight. Mike chats to Rupert about finding the balance between life and sport and the infamous Goulburn Valley fruit ads. 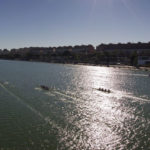