For the most part, I actually did alright in sport.  I won titles, made friends, travelled the world and enjoyed many wonderful experiences.  But a driven mind is often more programmed for a relentless quest to do better, rather than resting on any laurels.  It’s not easy to turn that off, particularly when it knows no other focus apart from the very narrow one of run faster, jump higher or train better.

When the dust settles on a sporting career there’s a personal legacy that needs to be dealt with.  All too often, this stage represents a whole new mountain to climb. I found myself wholly unprepared for it. Like coming to the end of a road where you never knew just how far you were gonna go and then one day, despite knowing it would eventually happen, you reach the end and fall, and fall, and fall.

The nature of the drive to succeed is the same force that consumes you long after the experience has passed. It’s a double-edged sword. The drive stayed with me. Like a revved up car engine in a car without wheels. The motor runs but you’re not going anywhere. At least you’re not going anywhere familiar. The passion was like a currency; once spent it could not be resurrected or reincarnated for better use.

The resulting vacuum tended towards despair. A melancholy of sorts that I struggled to shake for years. It impacted every facet of my life. A whole lot of energy and a mind doggedly fixed on a destination that won’t ever be reached is a lot of baggage to be carrying around. It needs to be let go, for sure, but it can leave a big mark. Goals which were burned into my mind since childhood can’t simply be erased overnight. An identity built around high ambition. I’m sure I’m not alone in the experience.

Mentally, you need to live some experiences in order to prepare for them.

Plenty of people aim too high and take a fall. Of course, there are a lot more serious goals than competing at an Olympic Games, breaking records or winning medals. I’m almost ashamed to watch the plight of refugees risking life and limb crossing the Med in search of basic human rights when I’m wallowing in self-pity about sport. What a joke. Man up, I thought.

High-performance sport (or I’d argue, high performance anything) is a tightrope walk where the stakes are so high that success is met with adulation and wonder, whilst failure is mostly a lonely experience. Success, as they say,  has many fathers. Failure, the proverbial orphan.

Of course, my experience was through an individual pursuit, arguably not the most transferable of pastimes for the real world where interdependence is the key to advancement. Ironically, the biggest lesson I learnt about individual sport is that the individualistic part of individual sport is a myth.

The best performers in individual events were very much team players, wholeheartedly reliant on their support team from coaching to managing the thousand logistical challenges athletes deal with every day.

From an early age I was conditioned to strive, grow, advance. What I wasn’t conditioned to do was to fail. Failure was, and always will be, an essential part of the equation. A necessary and important part of the experience. Failure finds everyone in some shape or form and how we deal with it defines us.  Nelson Mandela once said, “I never fail. I either win or I learn”. I like this attitude. Positive. Optimistic. Philosophical. That said, after working your butt off for years and at the very last moment you make a small mistake that costs you your season, no amount of philosophizing is gonna make you feel better.

More often than not, your emotions are so fully pegged to your blind pursuit of achievement that unlocking the pain that comes with the fall is easier said than done.

Needless to say, sport has a critically important and largely positive influence on society. At every level it adds value and these benefits should be celebrated, shared and protected. It’s easy to take for granted. But this thing of beauty does have a dark side. The underbelly of sport is a topic rarely talked about but often experienced by those at the cutting edge.

I’m reminded of the Charles Gnarls song ‘crazy’ which resonated with me in particularly dark times on the roller-coaster of international competition;

And when you’re out there
Without care, yeah, I was out of touch
But it wasn’t because I didn’t know enough..
I just knew too much”

There’s meaning in those words. The virtue of high performance demands that you lose your mind to some extent. You free yourself of conventional thinking and you live a very unconventional life. You do crazy things and take crazy risks. When it all pays off, it’s euphoric.

When it doesn’t, the fall can be long and hard.

But it doesn’t have to be.

Listen to athlete and expert opinion on how to deal with the physical after-effects of your sporting career. 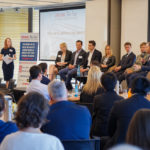 “You need to have an identity that isn’t entirely defined by sport.”

Olympians Sarah Cook and Kim Brennan discuss the importance of having a dual career pathway as an elite athlete.