Dr Kirsten van Heerden is one of only a handful of people in South Africa to have both represented her country on the sports field and also hold a PhD in the area of sport psychology. She has worked and travelled with high-performance athletes for more than 10 years, including Olympians, world champions and SA sports teams.

Dr van Heerden is the author of Waking from the dream: Stories of transition out of sport. Here she takes a look at the identity crisis that so many athletes face when transitioning out of sport, and how that can affect their self-worth.

There’s only one sure thing in elite sport.

It’s not even being selected for the team.

The only thing that every athlete can count on is this: that it will end.

Every athlete will retire. The when, where and how may differ, but the dream will end, and they will wake up to the reality of everyday, normal life. A life that can be disorientating and confusing, as the statistics across sporting codes show:

Of the challenges athletes face as they try to negotiate life after sport, loss of identity is one of the most difficult. “Sport is not just the game I play. Sport is who I am, what I am, why I am. Its every second on the clock, every moment I live”, says one of the latest slogans from adidas. It’s meant to motivate and inspire, pushing you to be the best you can be. You are an athlete, it is who you are – your reason for being.

So, what happens when you are no longer an athlete?

Who are you then?

The risk of an identity crisis

Many athletes draw much of their self-worth from their identity as an athlete. It is hard not to do this when everyone knows you as ‘the athlete’ and you put so much time and effort into the performance of this one identity (often to the detriment of others). But it creates difficulties when that identity is essentially taken away through retirement.

“I really struggled with figuring out who I was when I retired, because I had confused who I am with what I did. I kept thinking that without swimming, I was not worth anything of true value, and that I had nothing to give or offer my family, friends, or even society in general. I still struggled with this concept some years after my very last training session and last competitive race. Could I be someone other than THE SWIMMER, could I have different dreams and aspirations, and could I find success and happiness?”*

“You get to the point where you are lost – you lose your identity; you don’t really know who you are anymore and what you are doing.”

Penny Heyns, 14 x world record holder and first women ever to win the 100m and 200m Breaststroke at an Olympic Games, speaks of the difficult of not only getting others to see you as something other than ‘the swimmer’, but also of thinking of yourself as more than just an athlete.

Penny needed to figure out who she was apart from swimming, and although she knew that she was more than just a swimmer, she had to somehow prove this to herself and others. She didn’t want to be involved with swimming at all until a few years ago, because she wanted to separate herself, Penny the person, from Penny Heyns the brand, something that proved to be quite difficult, both professionally and privately. Penny says that only recently has she been able to walk into a business meeting and feel like Penny the business woman, rather than Penny the swimmer.

“I kept thinking that without swimming, I was not worth anything of true value, and that I had nothing to give or offer my family, friends, or even society in general.”

We have to encourage athletes to know themselves as people first, not just athletes, and learn that self-worth cannot be dependent on just one part of who they are. While there can be no balance in terms of time while competing (training is training), exploring other parts of themselves and interests apart from sport, is critical in adjusting to normal life one day.

You can find out more about preventing and/or managing an identity crisis in our athlete mental health and transition fact sheets.

*All quotes and statistics are from Waking from the dream: Stories of transition out of sport, by Dr Kirsten van Heerden.

"Dr van Heerden has worked and travelled with high-performance athletes for more than 10 years, including Olympians, world champions and SA sports teams."

Is retiring the same as quitting?Who am I if not an athlete? 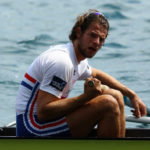 The human side of Olympic Gold

Our Olympic medalists are supposed to be joyous. But when rower Tom Ransley won bronze, he looked desolated.